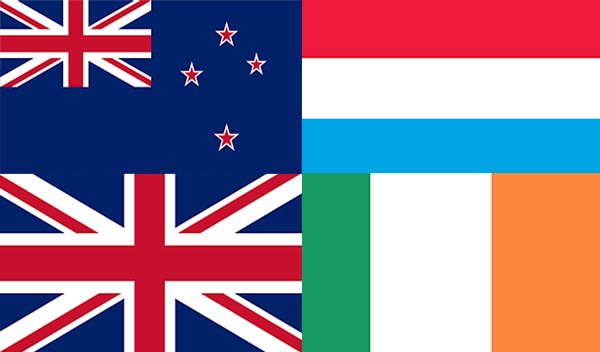 Coworking has seen rapid growth across the world in recent years. But which countries are doing the best?

Below I’ve listed the top countries across the world for coworking.

So let’s get into it.

In recent years Luxembourg has seen the highest growth of coworking across the world. With 8.5 new spaces per capita (every 1 million people).

It is a very small nation, home to just over 600,000 people, so this growth is really quite extraordinary. It is a forward-thinking nation and is looking to become a hub for coworking around the world.

Luxembourg is a very affluent country with the second-highest GDP per capita worldwide, second only to Qatar. The economy is heavily dominated by tech companies, especially fintech (financial technology) companies.

It is also a very well connected country, with it being so small and landlocked, the three neighbouring countries Belgium, France and Germany are never far away. The high-quality infrastructure provides fast transport links into and out of Luxembourg.

Ireland has witnessed a coworking revolution in the past few years with the majority of coworking spaces having opened in the last 5 years or so.

In 2019 there were 4.4 new spaces per million people. Similar to Luxembourg, Ireland is a small country with around 5 million inhabitants. However, it has had a serious economic rebound since the financial crash of 2008.

Ireland attracted many large companies into the country with the lure of low corporation tax. The majority of these companies settled in Dublin. Since then some of the employees have demanded remote and/or flexible working patterns.

Unsurprisingly a disproportionate amount of coworking spaces are located in Dublin. It has become a coworking hotspot in Europe, competing with the likes of Berlin, London and Barcelona.

Along with its established corporate offices, the startup community is thriving across Ireland, with thousands of new businesses being created every year, fueling the demand for coworking spaces.

The UK has been a leader in coworking space since the early days. There are hundreds of spaces dotted across the country with hotspots in Bristol, Glasgow and London.

Country-wide growth hasn’t been as high as elsewhere in the world, however, London in particular has made up for the lack of growth elsewhere.

Thanks to higher demand, the capital has become the world-leading city in terms of coworking. Data shows that a new space opens every 5 days in London. The fastest of anywhere throughout the world.

The UK has a strong economy, it is attractive to large corporate businesses for their headquarters therefore a high demand for coworking is to be expected.

Brazil is a bit of a wild-card. It has been a strong country economically for a long time. However, only recently has it started to head into the coworking sector.

It is such a wonderful country it is becoming popular with people going abroad to work there. Hence, the rise in coworking spaces that we see.

Having hosted the Olympics in 2016, Rio De Janeiro has seen the quickest growth and has become a hotspot across Brazil and Latin America.

Brazil plays host to some of the worlds best coworking spaces, with unique amenities such as pools and spas. While coworking is not yet widespread across Brazil, the industry is starting to take off.

Coworking spaces have been opening their doors across New Zealand in rapid succession the past few years. In 2019 there were 4.2 new spaces per capita. With New Zealand being a fairly small country this is extraordinary growth.

Auckland has become a hotspot for coworking across the country with the IWG (formerly known as Regus) brand, opening several new locations in the city. However, other cities such as Wellington and Christchurch are hot on its heels.

New Zealand is a wonderful place to live and work. With welcoming people and a great quality of life you can see why it is becoming popular.

With coworking growing rapidly worldwide, some countries are expanding quicker than others. Luxembourg, Ireland, the UK, Brazil and New Zealand are countries vying to take the top spot when it comes to coworking.

It won’t be long before we find out who makes it out on top.

Note: the data used in this article is from the Global Coworking Growth Study.