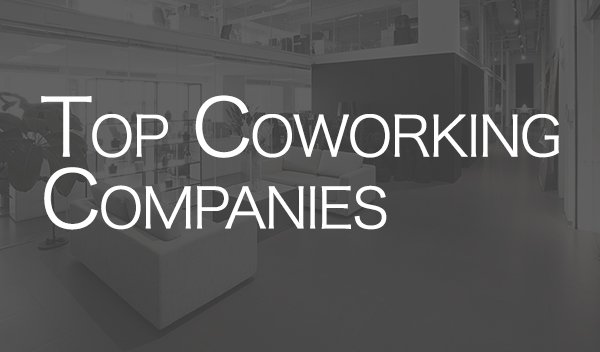 With the demand for coworking increasing every year, the top coworking companies are taking advantage.

But if you’re unsure which are the top coworking companies in the world, this article is for you.

We check out the top coworking companies, along with what they do and how you can rent workspace from them.

Whilst there are hundreds of coworking space providers, there are only a few top ones that have spaces available throughout the world.

There are hundreds of independent coworking space providers which are also worth considering.

Let’s check out each of them from above.

If you know anything about coworking you’ve undoubtedly heard of Regus. You may have even worked in one of their coworking spaces. But for those of you who haven’t, here’s a little info about them.

Regus, also known as IWG is an international company that runs coworking spaces in multiple locations across the world.

Founded in 1989 by a British businessman, Regus expanded rapidly in its first few years. Since then it has become a publicly listed company on the London Stock Exchange and has acquired many of its coworking competitors.

This has led to Regus becoming the largest provider of flexible office space in the world. They have over 2.5 million people working from 3,340 locations across 120 countries.

What does Regus do?

They work with a range of clients, from large enterprises all the way down to sole freelancers, matching them with space that suits their needs.

Each location has a certain amount of space allocated for coworking and private office space.

Regus generally offers more professional and formal offices compared to their competitors and independently run coworking spaces. You’ll generally find workspaces similar to traditional offices, yet you still get the benefits of a flexible workspace and a thriving community.

Competitors such as WeWork focus on the openness and transparency of an office environment, with open plan designs and plenty of glass. Regus have gone a different way where privacy is at the heart of their coworking spaces.

Regus also offers virtual offices and meeting rooms as well as their general office space. With a membership, clients can use one of Regus’ locations as their virtual office and have mail directed to the office. Receptionist services are also included in Regus membership.

Similarly, you can book one of Regus’ meeting rooms for an hour or two if you need a space to host a meeting.

How are they related to IWG?

Since 2016 there has been some confusion as to the difference between IWG and Regus and how they are related.

IWG (the International Workspace Group) is the holding company for Regus and the coworking companies that Regus has acquired over the years.

After Regus restructured in 2016 the name IWG was adopted in a similar way to how Google created Alphabet as its holding company.

Some of the other companies under IWG include:

Spaces is a business that offers coworking spaces for sole coworkers.

HQ offers flexible workspaces to clients of all sizes.

Signature by Regus matches their clients (often large enterprises) with high-end, prestigious locations across the world.

No18 is a members club for individuals that also offers high-end locations to its clients.

When we talk about Regus and the size of their operation worldwide, we include these smaller companies that it has acquired over time. These separate companies increase the diversity of workspaces that Regus offers.

Regus in the UK

Regus has been operating in the UK for a long time and it has amassed a varied portfolio of office spaces that you can choose from.

At the time of writing this article, there are over 321 different spaces to choose from up and down the country. Compared with WeWork’s 60 spaces this shows how large a company Regus is.

Regus not only offers office spaces and coworking desks but also meeting rooms and business lounges.

They signed deals with Heathrow and Gatwick airports for business lounges in these locations. Members can use these locations to get some work done, or just relax before a long flight.

Just a few doors down from the home of Sherlock Holmes on Baker Street you can find one of Regus’ flagship locations.

The space, located in Marylebone, is surrounded by a multitude of restaurants, cafes and chic boutiques. It has a rooftop terrace where you can take your well-earned breaks, taking in beautiful panoramic views of London.

The Baker Street location is home to over 90 private offices, has over 14 desks for coworking and 6 meeting rooms. They also run a virtual office subscription.

Coworking starts at £405pcm with private offices starting at £503pcm.

Another top coworking company that you may have heard of is WeWork.

For those of you who are new to WeWork, they are a real estate company offering coworking spaces and flexible office solutions in various locations around the world.

This is another international brand that has amassed a large number of coworking spaces around the world.

They now have offices in nearly 850 locations in major global cities and they are currently the largest coworking company in the world.

Ever since its launch back in 2010, WeWork has arguably been the driving force behind the coworking industry.

WeWork offers something slightly different to Regus. They focus on community-based working environments throughout major cities around the world.

WeWork typically owns or leases entire buildings meaning there is plenty of coworking space for major deals with large companies. Apple, IBM and various other fortune 500 companies use WeWork offices.

At WeWork, you can rent a desk, office space and/or become a member to access their community and networking events.

According to founder Adam Neumann, the community is what makes WeWork different from its competitors around the world.

Over the years, the company has developed various initiatives to help start-ups and entrepreneurs around the world.

In 2011, they launched WeWork Labs which aims to empower global innovation by offering start-ups workspace and education.

In the same year, PepsiCo sent a number of employees to a WeWork office in SoHo, Manhattan to act as advisors to start-ups and entrepreneurs.

Regus and WeWork are the two of the top coworking companies around today.

Regus offers a diverse range of flexible workspaces to its clients with a focus on professional and high-quality workspaces. They are the largest operator in the flexible office space sector with over 3,300 spaces around the world.

The company is publicly listed under its holding company IWG. Within Regus there are many different coworking space operators.

These different operators allow Regus to offer many different services and attract all kinds of clients, from large corporations looking for a high-end location to sole freelancers just looking for a desk, to anyone in need of a meeting room.

If you haven’t already, you should take a look at the Regus website and see what they have to offer, maybe even try out one of their spaces.

WeWork on the other hand focuses on providing a community based environment with a greater emphasis on collaboration and social working.

Whether you’re a freelancer, start-up or employee for a fortune 500 company, there’s a coworking space out there for you.